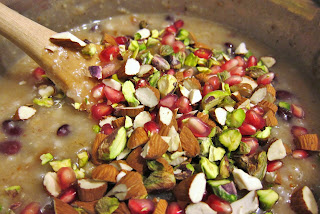 I'm taking a trip to Turkey in my kitchen tonight; this Turkish dessert (called asure) is one of the oldest and most traditional from Turkish cuisine, typically served during holidays, and prepared in large batches to share with friends and family.  The name derives from the legend behind the pudding, which says that when Noah's ark landed, those aboard gathered what little food they could, resulting in the small quantities of many ingredients (traditionally 15) in the pudding.

Ingredients:
1. Place the barley and rice in a bowl and cover with water to 2 inches above the barley mixture; cover and let stand for at least 8 hours or overnight; drain.

2. Place the barley mixture in a saucepan, along with 4 cups water and the salt.  Bring to a boil, then cover, reduce heat, and simmer for 25 minutes.  Drain the mixture through a colander over a bowl, reserving 2 and 1/4 cups of the cooking liquid.

3. Place 1 and 1/2 cups barley mixture and 1/4 cup of the reserved liquid in a blender or food processor; process for 2 minutes (a long duration which prompted my fiance to say, "That was painful."  Sorry!) 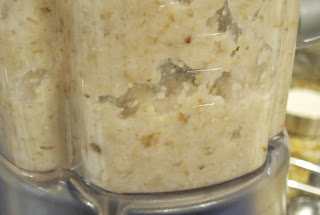 4. Return the pureed mixture to the saucepan, along with the remaining barley mixture, the remaining 2 cups reserved cooking liquid, the sugar, the chickpeas, the kidney beans, the raisins, the apricots, and the figs.  Bring to a boil, then reduce heat and simmer for 30 minutes.  The mixture looks very much like a thick breakfast cereal at this stage - be sure to stir rather frequently, otherwise you risk either having the mixture stick to the saucepan on the bottom, or forming a skin on top. 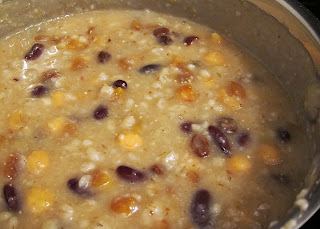 5. Remove from heat and stir in the rose-flower water.  Sprinkle with the almonds, pistachios, and pomegranate seeds.

Note: there are many different variations on Noah's Pudding, all of which will involve some combination of grains, legumes, dried fruits, and nuts, so have fun experimenting.  If you like, some versions use vanilla and cinnamon in place of the rose-flower water, but I highly recommend the latter (see my tasting notes below). 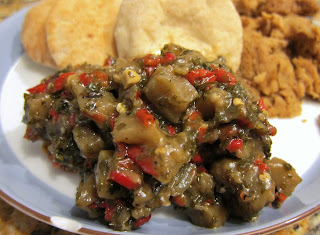 To continue the theme, I had fun serving a dinner beforehand built around other common Turkish ingredients.  On the menu was a store-bought eggplant and red bell pepper spread served with mini pitas, and seitan strips tossed with chile powder, to mimic the taste of lamb kebabs (kofte).

Tasting Notes:
One of the most wonderfully different recipes I've tried in a long time.  It was the rose-flower water that made it stand out - like the taste of petals in every bite.  I had wondered how the beans and dried fruits would taste together, and it worked, although I found myself wishing there were fewer beans and more dried fruit.  This pudding is also sweet; I recommend decreasing the sugar to 1/4 cup if you don't have quite so strong a sweet tooth. 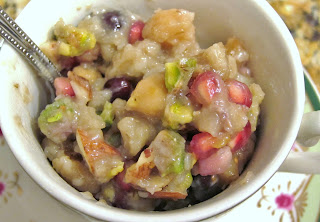 Update: although this particular recipe didn't say to serve the pudding chilled, most variations do.  I had leftovers chilled the next day, and the flavors were much stronger, particularly the dried fruits.  I highly recommend making the pudding in advance, therefore, and chilling.

Email ThisBlogThis!Share to TwitterShare to FacebookShare to Pinterest
Labels: Desserts